We are pleased to announce the return of Leonard Landy to Hollywood this time as one of the Laurel and Hardywood Convention’s celebrity guests. Len’s first Sons of the Desert event was the Our Gang Reunion at the Hollywood ’80 Convention. Since that time, he attended several Way Out West Tent banquets and meetings. 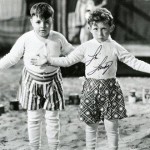 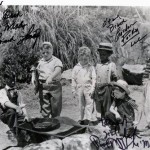 Len was known as “Percy” in many of the 21 Our Gang Comedies he appeared in from 1938-1941. He began his Little Rascals career at Hal Roach Studios with “Feed ‘Em and Weep” and finished up at MGM Studios after Roach sold the series. His last Our Gang role was in the film “Fighting Fools.”

We are excited that Len and his lovely wife, Carole, will join the fun at the convention!

One of the reasons I wanted to do another convention was to generate more interest in the Boys. To do so I am sending out a press release about the L&H, what the Sons of the Desert is all about and about the convention.

If you could please send me the email addresses of any newspapers from your area, I would appreciate it. This would include the local “throw a way” papers that most communities have.

I plan to send out this release in two weeks.

Thanks for your support,
Bob Satterfield
Laurel and Hardywood Chairman