The discount registration deadline for the 19th International Sons of the Desert Convention is quickly approaching. The registration fee goes up $75 after Tuesday, April 22. So, get your Laurel and Hardywood registration postmarked on or before that date. 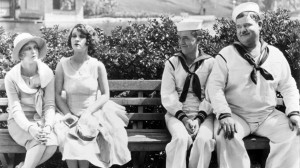 This is still an incredible value considering everything that is included in this “Convention of a Lifetime.” (The TCM Film Festival just wrapped up in Hollywood and prices for that event were much more for fewer days, fewer activities and no meals.) Never before in Sons history have two of the meals taken place at actual Laurel and Hardy film locations while watching those films. Plus you’ll have a chance to enjoy lunch in Culver City eateries that appeared in one of our heroes’ films. Don’t forget there also is a cocktail reception planned inside the Culver Hotel along with viewings of “Putting Pants on Philip” and “Leave ‘Em Laughing.”

There only are a few spaces left for the once-in-a-lifetime opportunity to sail on John Wayne’s former yacht, “The Wild Goose,” and have a buffet lunch on the “Queen Mary” the day before the convention officially opens. And there’s also the Habeas Corpus tour on Monday, June 30. Don’t get shut out of all the fun sign up now.

After the April 22 deadline, I will open up the two preconvention tours to local Sons who are unable to come to the convention. I expect at least one of the tours to sell out. I also will open up the dealers’ room to non-conventioneer vendors at that time. Fair warning!

More celebrity guests are confirming each week. The final plans now are being made on the film programs for opening and closing night, as well as the 100 Years of Hal Roach Studios exhibit at the Hollywood Museum. It still is not too late to loan your Laurel and Hardy and Roach memorabilia for this display of the ages.